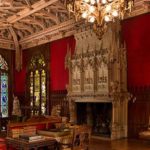 Marble House was built between 1888 and 1892 for Mr. and Mrs. William K. Vanderbilt. It was a summer house, or “cottage”, as Newporters called them in remembrance of the modest houses of the early 19th century. But Marble House was much more; it was a social and architectural landmark that set the pace for Newport’s subsequent transformation from a quiet summer colony of wooden houses to the legendary resort of opulent stone palaces.